When Yin Chen and his wife migrated to Australia in 1999, they assumed family ties were all the housing security they needed.

A few years later, a relationship breakdown with the couple’s son and daughter-in-law saw the pensioners facing the prospect of homelessness.

Luckily, support through non-profit organisation VMCH and the Assistance with Care and Housing (ACH) Program meant the Chens were able to secure permanent, affordable housing in Hawthorn East, where they’ve lived for the past eight years.

March 16-24 is Cultural Diversity Week, Victoria’s largest multicultural celebration and a chance to raise awareness about issues of importance among Culturally and Linguistically Diverse (CALD) communities.

Speaking through their VMCH Case Manager and translator, Amy Yuen, Mr Chen, aged 92, said he felt “depressed, frustrated and desperate” before moving to public housing. He cites Amy as one of the “most significant people in his life” since migrating.

Sadly, the Chen’s story reflects research that older people from CALD backgrounds are at higher risk of becoming homeless.

The reasons are many… language barriers, a lack of knowledge in navigating Australian systems and services, and poorer overall socioeconomic status compared to older Anglo-Australians, are some.

Housing for the Aged Action Group (HAAG) reports many older migrants, especially Chinese and Indian, often come to Australia later in life and haven’t been able to buy a house or have come to live with family and if it hasn’t worked out, have nowhere to go.

Amy, who says about 30 per cent of the 120 older people she supports through the ACH program are from CALD backgrounds, believes the type of housing, its location and ongoing support from services is crucial for older people’s long-term housing success.

Mr Chen, a passionate photographer, wanted to be close to his photography club and social network in Melbourne’s eastern suburbs. Without this, Amy says the couple would have become socially isolated.

“The couple was referred to VMCH through their Chinese social club, and photography is Mr Chen’s life, he said he cannot survive without this camera and taking photos.” 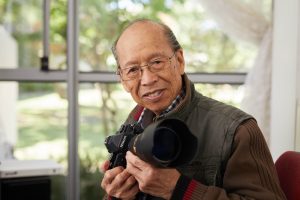 Finding a secure, affordable home was, above all, about staying together.

The couple, married for an incredible 70 years, are devoted to each other. Mrs Chen is her husband’s biggest supporter and routinely wakes up at 5am to fix his breakfast and get his camera equipment ready before he travels to the Dandenong Ranges to shoot the morning mountain mist.

Amy (pictured with the couple below) said the Chen’s were one of the “lucky ones” and that more should be done to help reach older people from CALD backgrounds who were socially isolated and unsure of where to turn.

“Along with more public housing, we also need to ensure once they are housed, there is enough social, emotional and financial support for people to live happy, healthy and longer lives. A big part of this is community groups and organisations working together to identify at-risk people and link them with relevant services.” 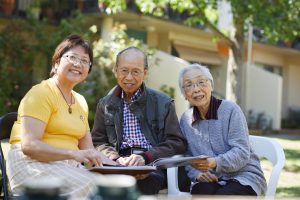